Neutralise most of the negative effects of 5G, WiFi, EMR, EMF.  The Geoclense® Home Harmoniser is a healthy, negative charge resonance field generator designed to balance the noxious Positive Ion resonance creating a healthy home for you and your family.

About the Orgone Geoclense Home Harmoniser

Are you 5G Ready?

As we go about our lives, we are being exposed 24/7 to Electromagnetic Radiation (EMR), Electromagnetic Frequency (EMF), Geopathic Stress and as it is being rolled out; now 5G. These energies are affecting you and your family?

We can be bombarded by over 30 different types of EMR fields being emitted from 5G, Wi-Fi, digital TV’s, Smart Meters, electrical radiation from appliances, power lines and more in our living and working environments. Regular exposure to strong electromagnetic forces which create unhealthy energetic conditions may contribute to health consequences.

The Geoclense® represents 20 years of Intuitive Building Biology Consultancy experience and intricate and advanced knowledge of the types of harmful electromagnetic fields which may exist within a given space. The Geoclense® has evolved to be much more than a powerful electrical, 5G and Wi-Fi radiation harmoniser. Over the years, due to the ongoing EMR research, there have been so many more built-in programs added that deal with negative energy imprints; things that you are often not aware of, however, which may be affecting your emotional well-being and ultimately your long-term health.

Just to give you an example of the potentially harmful energies in your home….

How is EMR affecting our health, and how can the Geoclense® Home and Workplace Harmoniser help?

When there is Geopathic Stress in a building, oxygen levels are depleted and the body’s meridians, organs, cells, immune system, nervous system, hormones and emotional state is put under stress. The danger with this is that continual exposure may lead to illness and health implications.

Some of the negative effects reported by people include:

So what can we do?

Installing a Geoclense® Home and Workplace Harmoniser improves and corrects oxygen levels. The Geoclense® Home and Workplace Harmoniser has been clinically tested and proven for effectiveness by Accredited health professionals worldwide such as Kinesiologists, Naturopaths, Chiropractors and Bioresonance practitioners who know how to test an EMR Harmoniser and space clearing device. What they test for is electromagnetic stress on meridians and organs.

These Kirlian images below were taken by an independent operator who was amazed at the performance of the Geoclense® Home and Workplace Harmoniser, as they had never before seen an energy tool which demonstrated such beneficial effects.  The image on the left is taken with no Orgone protection and the image on the right depicts the beneficial effect of the Geoclense® Home and Workplace Harmoniser on the human energy field. 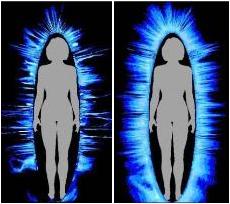 Additional unique features of the Geoclense®: –

To activate the GEOCLENSE®: –

What is the difference between the Geoclense® and the Stellar Dome™?

The Geoclense® and Stellar Dome™ both harmonise over 30 different radiation fields to the boundaries of a property. However, if you have mould and/or vaulted ceilings in your home, you would benefit more from having a Stellar Dome™.

The Stellar Dome™ is also totally portable making it perfect for personal EMF protection when you’re out and about and while traveling.

Click Here to find out about the Orgone Stellar Dome

“I first bought my Geoclense Home Harmoniser in 2014 along with the Phone Harmonisers and some protective jewellery. I could instantly feel the clarity and harmony when using the products. I bring the Geoclense with me every time I travel and now I sleep better in hotels. This year I needed to buy more Phone Harmonisers for my kids new phones and I thought I would try the Car Harmoniser and the Stellar Dome for 5G as well. Well, I was so impressed with the Car Harmoniser, my new car has WiFi capability along with all the general toxic energies you get from a new car these days and the difference is amazing – I actually feel energised when I arrive home after a school drop off run rather than drained as I used to feel. I was getting concerned with 5G and the newer stronger technologies around and Julie recommended the Stellar Dome for the home as it has been programmed to neutralise all of those newer frequencies along with 5G. I am even more impressed with this little green dome. I can really feel the difference and it’s so easy to just pop in my handbag and take out with me. I just love being protected by all of these amazing products. Thank you Julie for selling these products. I love your website and am so grateful for your patience and support.”
Melanie, ACT

“I love energy and have worked with it all my life, I work in whole energy believing that everything is integrated and affects everything.  As such, I was excited by the Orgone energy when I read about it, and my respect for the products has only increased upon working with them.  The balance and harmony it provides is amazing.  I know my family is protected on many levels now both at home and when out living life!”
Taralye, Qld

“After Bio-resonance testing showed that my body was under organ stress from Geopathic Stress I researched solutions and purchased the Geoclense.  I knew that I was being affected and that my health was under threat.  You will be happy to hear that a follow-up Bio-resonance test (Bio-meridian) shows that there is hardly any body part affected by Geopathic Stress anymore!! The results are the same for my daughter and friend who both also have the Geoclense. My daughter also has a Smart Meter installed so this is an even bigger relief.  Almost overnight I started sleeping like a log!  It has been marvellous to feel rested again.  I also feel more cheerful I am very happy to know that the Geoclense can protect us from so much.  I know the Smart Meters are coming here soon, so it’s great to know I will be protected!”
Melanie, Kansas USA

“I have had an Orgone Geoclense Home Harmoniser for a while now and I have become accustomed to the improved energy in my house, so I was shocked when the Geoclense was recently unplugged. I could feel the energy drop and I felt a heaviness – subtle but not pleasant. I couldn’t wait to get it plugged back in again. I can feel the extent of the extra energy from the Geoclense outside my house and even in the street – I know where it stops as I start to feel that heaviness again. It’s interesting that visitors to my home often comment that my house has a nice ‘feel’ to it, or that it has good energy, so I know that others are noticing the effects of the Geoclense too.”
Jenner, Theta Healer, Mt Martha

“Since having had my house cleansed with the Orgone Geoclense Home Harmoniser installed in the electrical circuit, I have been waking up feeling awake for the first time in my life (55 years of waking up feeling as tired as when I went to bed is a good point of reference.)”
Dr. Jessica Read

I am keen to share information and would welcome relevant material to add to my website in the hope of assisting people to stay informed and make educated choices and decisions.

We use cookies to ensure you receive the best experience on our website. If you continue to use this site we will assume that you are happy with it.OkPrivacy policy